"Not Your Ordinary Small Town"

Amtrak's Phase IV Heritage P42 #184 leads the daily southbound Heartland Flyer out of Pauls Valley, Oklahoma on a cloudy May 4th, 2021.
Pauls Valley is a city in Garvin County, Oklahoma named after Smith Paul, a North Carolina native who married a Chickasaw woman, became a citizen of the Chickasaw Nation and settled in the area during the 1840s. The settlement was originally named "Smith Paul's Reservation" then "Smith Paul's Valley" before being shorted to just "Pauls Valley" in the late 1890s by the Atchison, Topeka and Santa Fe Railway (ATSF) as the original name was deemed too long for the their station signs. Their slogan of “Not Your Ordinary Small Town” describes the place very well. The original depot, pictured here, was constructed in 1903 and renovated into a museum by the Pauls Valley Historical Society in 1991. Next to this building is the current station house, which was built by the city in 2002 to architecturally match the original following the return of passenger rail service to Oklahoma on June 14, 1999, when the Amtrak Heartland Flyer began operation.
GREGORY GRICE 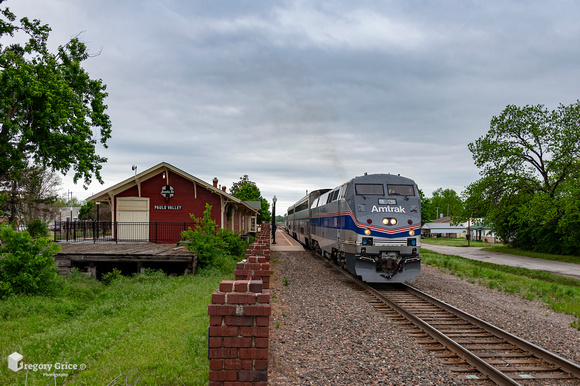