Amtrak's Phase IV Heritage P42 #184 leads the daily southbound Heartland Flyer out of Ardmore, Oklahoma on a cloudy May 4th, 2021.
Ardmore is a city in Carter County, Oklahoma named after the Philadelphia suburb and Pennsylvania Railroad stop of Ardmore, PA, which was named after Ardmore in County Waterford, Ireland, by the Pennsylvania Railroad (PRR) in 1873. It is one of five cities along the Atchison, Topeka and Santa Fe Railway, now BNSF, mainline in Oklahoma to be named after PRR stops. Overbrook, Wynnewood, Wayne and Paoli are the others. The current station depot was built in 1916 shortly after a railcar containing natural gas, the city's major export, exploded in the adjacent rail yard destroying the original 1905 structure. Ardmore is located 90 miles from both Oklahoma City, OK and Fort Worth, TX, making it the center stop of Amtrak's Heartland Flyer service, which continues to serve Oklahoma since the return of passenger service in 1999.
GREGORY GRICE 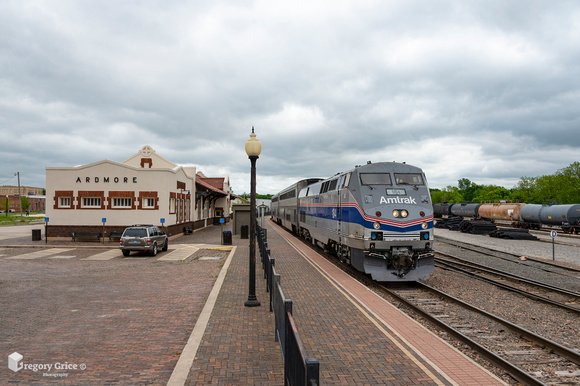